Often, I don't sleep very well.  I have a hard time getting to sleep, and I regularly wake up in the middle of the night and then have a hard time getting back to sleep.  One of the things I've found recently that helps me get back to sleep is to meditate on different excerpts from the Bible.  I've been rather fixated on the 23rd Psalm for a while (and my success rate of falling asleep after thinking about it has been pretty good), so I thought I'd do a series of posts on my thoughts on it.  This is part 6 of my 'meditations' on Psalm 23.

You Anoint My Head with Oil....

I'm not a shepherd, and I never have been.  While I've heard that oil can be helpful on a sheep's head, I don't claim to know that for a fact, so I won't get into that here as it doesn't mean much to me personally.   This phrase does speak to me about a couple of things: resources I need, but that are beyond my ability to control, and the value of 'anointing' to David.

Even in this day and age, both oil and water are valuable resources.  What kind of oil was this - vegetable oil or some petroleum based oil?  Where ever it came from, it was likely purchased by the shepherd.  Since the shepherd anoints my head with it, that means I must also have an intrinsic value to him.  A comforting thought, even if I don't entirely understand the practical use for oiling a sheep's head.

Being 'anointed' had a symbolic and powerful meaning to David.  He was actually anointed to be king and lead God's people (in ceremony) three separate times.  His first anointing was performed by the prophet Samuel.   King Saul was also anointed by Samuel and because of that David wouldn't touch him.  Multiple times Saul tried to hunt David down and kill him, and David wouldn't touch Saul because 'he is God's anointed one.'  I recently re-read the story of David's life in the bible and one of the things that struck me was how adamant (frustratingly stubborn) David was in this conviction of not touching Saul, 'God's anointed one'.  At least, if I was in David's group of men, that's how I would have felt about it.  Clearly though, David believed that God's anointing carried with it a strong connotation of God's authority and protection.

I've been recently intrigued by imagery in the Bible of overflowing springs, wells, and cups.  The Garden of Eden was watered by a river that split into 4 rivers and watered things.  Where did that river come from - the ground perhaps?  Twice God provided water for the Israelites in the wilderness by means of a spring of water from a rock.  The city of Jerusalem was built around the Gihon Spring (Gihon means gushing), and once David became king he made Jerusalem the capital.  In John 4:13-14, Jesus talks to the Samaritan woman at the well and says, "Everyone who drinks this water will be thirsty again, but whoever drinks the water I give them will never thirst. Indeed, the water I give them will become in them a spring of water welling up to eternal life."  And finally the book of Revelation, the last book of the Bible, chapter 22 talks about Eden being restored and a river flowing from the thrown of God. 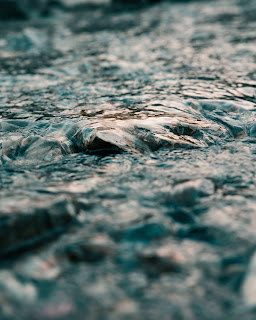 Considering the value of a resource like water in a place like the Middle East, particularly for animals like sheep, the symbolism of an overflowing cup is extraordinary.   A valuable resource in abundance, provided for me!  Not just for drinking, but washing, and swimming.  Perhaps this also gives me an indication of what the table that God prepares for me looks like?

I've made the assumption (hopefully a safe one) in this meditation that the 'overflowing cup' in this Psalm is overflowing with water.  If that is true, one could say that these two valuable resources are drawn from opposite sides of a spectrum, because oil and water don't mix.  Yet, the Holy Spirit in the Bible is represented at different times as water and/or oil.  I haven't really delved into the significance of all that, but thought it was interesting.