Have you even been in a situation where you're watching an event unfold right in front of you, and the person involved in that event is going to get hurt, potentially badly, and there's nothing you can do to help them?  There isn't enough time for prevention, you're half aghast that the event is actually happening, and all you can do is observe while your stomach drops to your toes.  You hardly even have time to murmur a quick prayer:  'Oh God...'

I had events happen like this with each of our kids when they were younger - one with Kornelia, and one with Erik.  Fortunately, God protected both of them from getting seriously hurt in both circumstances.  Here's what happened...

Did you ever get confused as a kid with the brakes on a bike?  I think like most people, Kornelia's first bike had brakes in the pedals.  Then, when when she got a bigger bike, the brakes moved up to the handle bars.  Trying to stop that bigger bike with the pedals doesn't work very well, AT ALL.  I think this may have happened to Kornelia...

I took the kids for lots of bike rides when they were younger.  Calgary has lots of great paved biking paths.  One summer Saturday when Kornelia was about 11 or 12,  I took her for a pretty good ride - maybe 10 kms or so.  On the way back, the route I chose had a rather steep hill on it.  There were two routes down - one was paved and zig-zagged down the hill so it wasn't so steep.  The other route was a trail that went straight down the hill, intersecting the paved path at a couple of points.

I went down the hill first and took the straight path.  I thought Kornelia would take the paved path, but she didn't.  I looked up in shock to see her coming straight down the path I'd just ridden.  The steep decline accelerated her quickly and she panicked, forgetting where her brakes were.  I might have yelled, 'Use your brakes!' but if I did, she didn't hear it.  She rocketed down to the bottom of the hill as I watched, transfixed and terrified.

The bottom of the hill was immediately flat, but there were numerous obstacles:  A garbage can held solid with a cement foundation; a large boulder to prevent vehicles from driving up from the road; and large bushes all around.  I had no idea how she'd manage to navigate around these obstructions or where she would go.  Everything unfolded in slow motion for me. 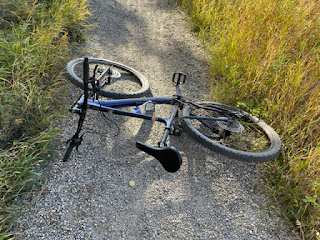 When Kornelia and her bike hit the bottom of the hill, she launched off her bike and flew like Peter Pan.  I believe God's angels were there giving her an extra guiding push, because she flew quite a distance (several metres) into a large wild rose bush.  The bush was so thick it broke her fall, but scratched her a fair bit.

I nearly pee-ed my pants.  I shook with adrenaline as I helped extricate her from the bush.  God absolutely protected her from serious injury in that situation.  She walked away from that accident with scratches from the rose bush.

Back Flip Off a Swing

Erik was about 4 or 5 when we went to a nearby playground after supper.  It was winter and the sky was already dark. It wasn't too cold though, and we'd had some significant snow recently so it seemed like a fine evening to get some outside activity and fresh air.  Erik was bundled up in a snowsuit, mittens, and a toque.

After horsing around on some of the more interesting apparatus in the playground, Erik asked if I could push him on the swing.  I helped him on and gave him some pushes.  Being a typical boy, he requested 'Higher, Dad!'  So I pushed him higher.  I imagine the combination of his clumsy mittens and the frost on the chains didn't help Erik's grip. When the swing reached its full forward amplitude, Erik lost his grip on the swing chains and plummeted down.

Again, for the duration of that fall, everything was in slow motion.  I watched frozen - literally and figuratively - as Erik flipped backwards off the swing and landed headfirst on the ground.  Immediately I thought, 'Can he feel his feet?' and 'Is he conscious?'  I ran over to see how he was.

God cushioned his fall!  He was stunned, his neck was sore, and I think the fall knocked the wind of him, but he was OK otherwise.  But he was no longer interested in playing outside that evening.

"He will command his angels concerning you to guard you carefully"  Luke 4:10

As I've grown older, I begin to recognize patterns and attitudes in my daily living that I didn't pay attention to when I was younger.  For example, I've noticed if I haven't exercised in a while and then a do some intense cardio where I'm breathing hard, the next day or two will find me coughing up phlegm a fair bit.  Its not a cold, my lungs are 'cleaning up'.

Another example I've noticed is that some evenings when I'm very tired - particularly after a more intense day - my attitude suffers.   My thoughts tend to get quite negative and brooding.  I can be grumpy with others, and I find it much easier to blame God for things and wonder negatively about my station and position in life.

God's Mercies are New Every Morning

But then...  I've also discovered this other amazing thing:  I can go to sleep and wake up in the morning feeling and believing that 'its a new day with new opportunities and new hope!'  I also find it easier to forgive other people and the issues I had with them from yesterday.  I believe God gives me this gift most mornings - I'm able to see my life with a renewed, refreshed perspective.

This might sound a bit silly.  And yes, there are mornings where I definitely get out of the wrong side of the bed and I'm grumpy.  However, for me this 'hope and grace' in the morning is a tangible proof of what the prophet Jeremiah says in Lamentations 3:22-23:

The steadfast love of the Lord never ceases; His mercies never come to an end; they are new every morning; great is your faithfulness.

God's grace and mercy is new every morning, for us!  I want to continue to try and receive and embrace it, whether I feel like it or not.  Will you, too?