Our small group has been working through Francis Chan's book 'Crazy Love'.  As my wife and I were preparing for Chapter 4 - The Profile of the Lukewarm, we were discouraged.  It's a pretty convicting chapter, with lots of attention on verses like Luke 12:16-21, Amos 6:1, and Matthew 7:21.  Francis does warn the readers that it was the hardest chapter of the book for him to write.  I was rather frustrated with Francis after reading it, thinking: "How hard is it to put together a bunch of verses and take a hardline approach?"  Some advice here - Please don't read Chapter 4 and put the book down.  Francis does back up what he's saying in other chapters - there's 'real-living' behind where he's coming from.  Additionally, we were reminded of the context of the book - how these life choices and decisions need to come from a place of abandoned love for God and not from fear or guilt.

I was still concerned how small group would go...

We ended up having a great discussion.  I actually felt like God spoke to me (a bit of an 'ah-ha' moment) towards the end of the group.  One scripture I couldn't seem to let go of was Matthew 10:32-33 "Whoever acknowledges me before others, I will also acknowledge before my Father in heaven.  But whoever disowns me (denies me) before others, I will disown before my Father in heaven."

I was thinking about Peter...   Jesus had called him from a life of fishing to being a disciple.  For three years, Peter had listened to Jesus say truths like this, and watched Jesus do miracles.  Three years is a good chunk of one's life, and Peter thought he was committed.  He believed he had given everything up.  He told Jesus he would 'never fall away' in Matt. 26:33.  Jesus replied saying that Peter would in fact fall away that very night AND disown Jesus three times!  Peter again disagreed.

Then, less than 12 hours later it actually happened.  How must Peter have felt, considering Matt. 10:32-33 above?   Matthew says 'he wept bitterly.'  I know if it was me, I certainly would have spent a lot of time over the next hours and days replaying the whole scenario - realizing that I didn't really know myself.  How could I say one thing so strongly and then relatively quickly turn around and do another?  I'd also wonder what would happen if I ever saw Jesus again... how would I feel, what would I do, but ultimately what would He say and do?

Its the next part of the story that really got me thinking....

In John 21, Jesus had risen from the dead and he had appeared to the disciples, the disciples ended up fishing...  all night, with nothing to show for it.  Jesus shows up and tells them to cast their nets over to the other side of the boat.  When they do, the nets are so full they can't pull them in and they realize it's Jesus on the shore.  What's interesting at this point is what Peter does.  Without hesitation, he leaves his buddies struggling with the nets of fish and swims ashore to see Jesus. 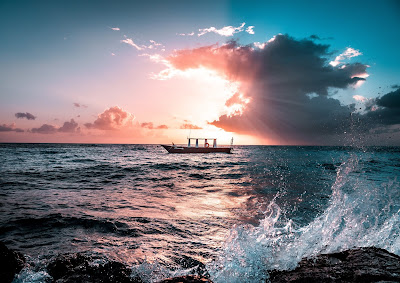 I almost sure that is NOT what I would have done.  I probably would have stayed with the guys, finished the work, and then, once on shore, taken Jesus aside and talked with Him sheepishly.

Peter didn't do that, which tells me he knew something about Jesus that I'm missing....  Something I'm not understanding from my reading of the Bible.

Peter pretty much lived with Jesus for 3 years.  He heard Jesus say all kinds of radical things about uncompromised commitment.  And yet when he blew it (and he blew it, big-time), he didn't cower or put on false humility and stay distant - he went straight to Jesus without ANY hesitation.  For this kind of reaction, Peter must have been convinced of several things:


John 1:14 says, 'The Word became flesh and dwelt among us.... full of grace and truth."  Its easy to focus on the 'truth' when you read the gospels.  There's definitely some hard-hitting truth there.  I personally sometimes miss the grace.  Jesus was full of truth AND grace at the same time.  I think Peter knew that, and that's why he was so keen to talk to Jesus again.  What a moment that must have been.