After Ewa and I got married, we lived in Warsaw, Poland.  After almost a year, we went to the Canadian embassy to ask them if, in the event we had children, they could obtain dual citizenship.  We got that answer, but at the same time the embassy told us that immigration law in Canada had changed and if we ever wanted to move back to Canada the ONLY way they would allow Ewa into the country was if she officially immigrated.

We didn't want to be in a situation where Ewa was not free to travel to Canada, so we decided to change our plan to live in Poland.  We quit our work contract in Warsaw and I went to Canada alone so I could find a job and sponsor Ewa's immigration.  I left Poland in Sept. 1994 and God provided immediate employment for me in Slave Lake, Alberta.

There is a lot of wilderness and wildlife in northern Alberta surrounding Slave Lake.  In fact, the highways there have a swath of extra forest cleared on each side so drivers can see wildlife approaching the road more clearly - it a safety issue!  Moose are particularly numerous and dangerous because they are dark, quite large, an have a high centre of gravity.  My Dad had a work colleague lose her life in a car accident with a moose as she was returning to Slave Lake from a trip. 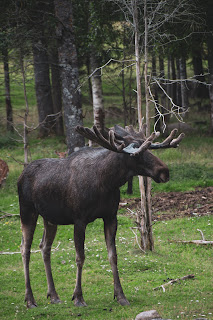 This is nearly what happened to me as well.  Early one morning after a night shift at the OSB plant, I was driving home from work struggling to stay awake.  It was still dark out (the shift ended at 6am).  Suddenly on the passenger side of my car a large bull moose appeared, preparing to trot across the highway.  I was doing the speed limit and I had no time to react.  Fortunately, I was just ahead of him as I passed him.  If I had been a couple seconds later, I would have taken his legs out and he would have come through my windshield.  God's protection and timing!

That’s right—he rescues you from hidden traps, shields you from deadly hazards.
His huge outstretched arms protect you—under them you’re perfectly safe; his arms fend off all harm.
Fear nothing—not wild wolves in the night, not flying arrows in the day...
Psalm 91:3-5

The Dream of the Lost Gloves

Journal entry from May 29, 1999
Before I forget, I made a mental note to write this story in the Journal before I forgot it again.  Ewa reminded me of it one night when we were having small group and talking about things that God had done for us...

Ewa had bought me some nice leather gloves in Poland.  I had them with me when I came to Canada in the fall of 1994.  Used them that winter (of 94-95) in Slave Lake and then put them 'away' until next winter.  Ewa immigrated to Canada that spring in May.  Eventually next winter came and I couldn't find the gloves anywhere.  I looked for them high and low and came up empty handed (haha, nice pun), so I made a mental prayer to God asking Him to help me find them.  Later the next day, I took a nap and I dreamt of precisely where they were.  They were in the garage in one of the old, large, pool chlorine buckets.  I woke up and went immediately to that old chlorine bucket in the garage.  Sure enough, thats exactly where they were.

God's direction in a dream!