Often, I don't sleep very well.  I have a hard time getting to sleep, and I regularly wake up in the middle of the night and then struggle getting back to sleep.  One of the things I've found recently that helps me return to sleep is to meditate on different excerpts from the Bible.  I've been rather fixated on the 23rd Psalm for a while (and my success rate of falling asleep after thinking about it has been pretty good), so I thought I'd do a series of posts on my thoughts on it.  This is part 8 of my 'meditations' on Psalm 23.

I will dwell in the house of the Lord forever.  What does it mean - to dwell?

Our house is getting close to 25 years old.  In the last couple years we've replaced the roof, the hot-water tank, and the guts of the furnace.  Additionally, our living room window tends to leak when precipitation is blown at it, and all the windows have frost issues in the winter when its cold out.  The pipes to our kitchen sink can freeze if we aren't watching them carefully, too.  We've put a lot of concerned thought into our house in the past couple of years.  Upgrades and window replacement costs aren't trivial.

What a dream - to live in someone else's house rent free and not have to worry about mortgage payments or maintenance!  That's what I imagine its like 'dwelling in the house of the Lord.'  Living care-free, debt-free, responsibility-free.

I can also 'dwell' on a thought.  In doing so, my mind rests on a thinking spot.  And its a thought I keep returning to.  A delightful or passionate meditation.  Its like the 'dip' gravity makes in the plane of space-time around a large object like the sun.  Because of this dip, objects are either drawn to the sun, circle it, or keep returning it from a far distance. 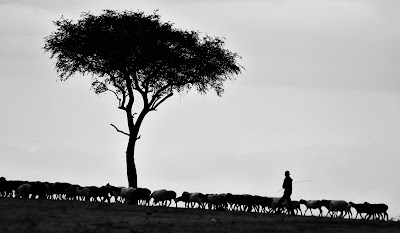 I assume shepherds in David's day often slept out in the open with the sheep.  A fire would be going for warmth, but I don't think there would be a comfortable 'dwelling' for the shepherd.  One doesn't get a great rest when you have to keep a fire going all night and lookout for predators or strays.  I imagine a dwelling for a shepherd would be like a day off, or retirement.  A place to return to where everyday worries and concerns can be left behind.  Where one can really rest.

The phrase 'I will dwell in the house of the Lord forever' reminds me of Hebrews 11 where, several times the author speaks of heroes of the faith '...longing for a better country - a heavenly one' and '...looking forward to the city with foundations, whose architect and builder is God.'  I can totally see that shepherd thinking... longing for that better place to lay his head.  And what better place than a dwelling that is designed, built and maintained by God, the Good Shepherd?

In the 23rd Psalm, there really isn’t much spoken about what a sheep does other than normal living... it lies down, it walks, it eats and drinks. It’s a ‘being’ rather than a ‘doing’. Interesting. Oxen pull a plow or a cart. Horses carry people or pull chariots. Sheep... don’t really ‘do’ anything. Today we’re very consumed with who we are, what we’re doing or what we’ve accomplished, and what people think of us. You don’t see any of that in this psalm. It’s all about who God is and what he’s doing for us.