My second overseas trip was to Europe.  Many of my friends had already been to or lived in Europe in some form or fashion and I had heard all of their stories and was itching to get there myself.  I had several reasons for going:

What’s the price of two or three pet canaries? Some loose change, right? But God never overlooks a single one. And he pays even greater attention to you, down to the last detail—even numbering the hairs on your head! So don’t be intimidated by all this bully talk. You’re worth more than a million canaries.
Luke 12:6-7 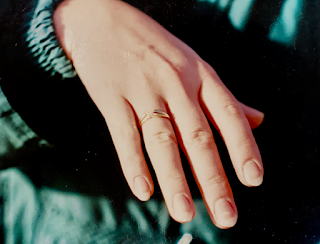 I proposed to Ewa on New Years Eve during this trip. We were in a little town called Krynica nestled in the Polish mountains.  Later, we bought an engagement ring together in Wroclaw - you can see the ring in picture.  Ewa was concerned because she knew that people would ask to see the engagement ring, and she had a rather large wart on the middle finger beside her ring finger.
I don't remember exactly how our conversation went surrounding this concern, but Ewa and I agreed to pray about this wart and ask God to remove it.  We prayed and then moved on to other things.
God definitely heard that prayer, as within 2-3 weeks the wart on Ewa's finger was completely gone!
God is our healer and He cares about our concerns!
90s Europe Trip - The Bad Passport
90s Europe Trip - Vienna
Living in Warsaw
Click here for more true stories of God's faithfulness to us
at February 03, 2022