It seems to me there are some Biblical accounts where God does what I'd call 'a circle of completion.'  He gives a person a dream, a starting place, or a 'state of being', then a whole bunch of activities and change happen, and in the end the people involved find themselves returning full-circle.  Some examples I can think of are Jacob and Bethel, Joseph and his dreams, Job and his life, Joshua and Jericho.  There are some situations in Ewa's and my life where we've seen this, too.  Here's one of them...

After Ewa and I got married, we lived in Warsaw, Poland for a year.  We worked for the Polish Baptist Union Publishing House during that time.  Part of the employment agreement with them was they would provide us a place to live.  That place ended up being a new, rather large apartment at their seminary in a suburb of Warsaw called Radosc (radosc means 'joy' in Polish).  Living there for that year was something of a 'full circle moment' for Ewa.  Here's why:

Previous to us getting married, Ewa had worked as a liaison between the North Carolina Southern Baptists and the Polish Baptist Union on a project.  That project involved building that seminary!  When she was originally asked to become the liaison, she was very concerned about how involved she might become with the project and wondered if taking the position was the right thing for her to do.  As the day of the decision loomed, she had a dream on night that two ministers she was acquainted with from the States had arrived in Warsaw on the train specifically to visit her with a message.  She woke up struck at the clarity of this dream and curious because she thought they were back Stateside at the time.  Later that day, out of the blue a phone call came from this pair of ministers saying they were at the Warsaw train station!  They asked if Ewa could come and meet with them as they had a message for her.  The message was to encourage her with taking this opportunity - God would support her in it.

Ewa worked on the project for a gruelling 3.5 years.  The work involved travelling to North Carolina in the winters to recruit and prepare construction teams that would come over to Poland in the warmer months.  When these teams came to Poland, she worked as their translator and guide.  The weekdays were spent working with the teams on the Seminary construction.  On the weekends she took the teams to see various churches and cities around Poland.  She had considerable time and effort (literally blood, sweat, and tears) invested in that Seminary construction partnership and project.

Even the land the seminary was built on had an interesting story.  Before WWII the land had been owned by a Jewish family.  During the war they had been protected and hidden by Polish Baptist Christians.  After the war, they gifted this land to the Polish Baptist Union as a token of appreciation.  However, the Union couldn't possess the land until after communism fell in Poland, which was why construction didn't start on the seminary until the early 1990s.

Living at the Seminary 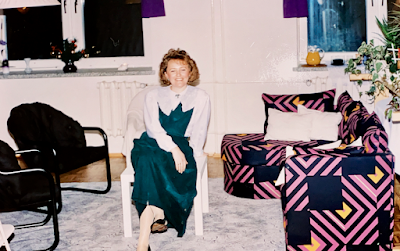 Our first year of marriage living at the seminary was poignant for us.  Ewa got to enjoy some of the 'fruit of her labour' in living there.  Because our apartment was so large, we were able to host lots of guests. I had Polish language lessons in the evenings there, learning better Polish grammar.  Ewa blew an electrical fuse in the complex installing a light fixture (220 volt system over there).  We bought our first clothes washer, our first piece of furniture, and our first TV in that apartment. We had a 2km one way walk through a forest to the bus stop for work each day.  I carried that new TV from that bus stop all the way back to the apartment the evening we bought it - what a workout!  God had provided our first living space for us in a special way.  It was a provision that closed a circle in completing a busy, fulfilling chapter in Ewa's life.