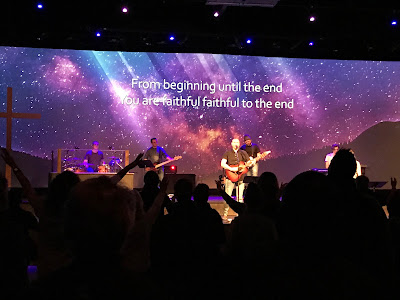 It been a long time since I attended a full on conference of any kind.  I guess perhaps one reason I don't attend conferences very often is because I find I get discouraged afterwards comparing my life to the lives of the people who were leading/speaking.  And they make for a really busy weekend.

Some good things I'd forgotten about conferences though that pleasantly surprised me this weekend were:


I had been asked to teach a keyboard seminar at the conference this weekend, so I was actually involved in a way.  That was fun.  You can see/download my notes on that seminar/workshop here.

Here's my thoughts and feelings on what the speakers said...

I had never heard the vision behind 'The Burn' before.  The story about the inception of The Burn in Sean's college dorm room reminded me of something that happened after my first year of college, and made me wonder if I had missed an opportunity.  I got past that train of thought pretty quickly though.

His whole talk on David was great - I hadn't heard it put quite like that before either.  His thoughts on 'What possessed the heart of David to say he wouldn't sleep until he found a home where God would feel welcome on the earth?'  and how David ended up transforming the nation by creating a 'government ministry and dedicating government resources - essentially taking money from the nation's economy' to fund full time worship to God were great.  The impact and influence of David was so great that people actually called Jesus 'the son of David' and he answered to that!

Paul serves as the worship pastor at Bethel.  They shared together on Saturday morning about their journey getting to Bethel and their path of growth while they've been there.  Two things have stuck in my mind from their talk:
I'll be honest - Lately I can get stressed at our own church with the expectations there on the level of excellence for the worship service.  Some weeks where I wonder to myself if I really want to keep doing this.  Several times at the conference it was said that serving in the music ministry in the church should be considered 'a privilege'.  That almost came across as patronizing to me.

Maybe I'm getting older and tire out easier?  Maybe some of the situations (both good and bad) I've had are leaving me feeling like... my experience is ignored and/or not considered?  Its challenging to come to a new church with so many years of experience playing in bands and just serve.  I liked playing the drums in a church service and feeling that there was no other place in the world I would rather be in that moment - that I was in the centre of God's will for me at that time.  Now there are so many things to think about and to get right while I play, I feel like I'm starting to lose that 'centre'.

This challenge has been good, because its driven me to do a lot more praying.  And the benefits of that have been amazing.  So, all in all, I've been experiencing a lot of growth lately, and I'm thankful for it.  I have to remember my big take-away from the weekend:  God doesn't waste anything!  I need to find Him and my purpose where I'm currently at and live in the present and not wish I was somewhere else, doing something else.
at March 06, 2018