God's Protection With Vehicles Growing Up

Remembering how God protected me in vehicles growing up, I'm conscious of how things could have been much worse given the accidents I was involved in.  I've already posted about the very first, worst one here.  With the other three, I think if my position, the vehicle's speed, or the timing had been a little different, the outcome could have been much worse.  I believe that I walked away from these accidents unscathed because of God's protection.

When I was in grade 10, our high school band got a government grant to be part of an exchange program with another high school band on the other side of Canada in Nova Scotia.  We hosted them in our community in BC during a week in February that year.  They played their repertoire of songs in schools and community centres in the area and experienced life in Western Canada.  Then later in May we travelled out to Nova Scotia to do the same.

I was hosted by Kyla Woodworth's family on their apple farm while we were in Nova Scotia.  The farm had been in their family for more than a generation and they had many of the usual tools and implements one would see on a farm like that, including a couple of Honda ATCs. 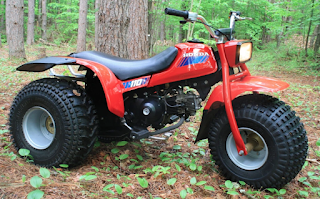 ATCs were gaining notoriety at the time because, being 3-wheeled, they were easy to flip.  And if a large one rolled on you it could be bad news.  The first full day I was there, Kyla and I took those ATCs out to a back field to burn around.  I had grown up driving a dirt bike, so I wasn't too far out of my element with this motorized trike.  What different for me was steering - on dirt bikes you can steer at speed by leaning and turning the handlebars very gradually.  Leaning on an ATC does nothing except move your centre of gravity.

Returning to the farmstead after burning around in the field, I chased Kyla down a dirt lane that was lined on either side with young saplings.  At one point I found myself going at a good clip drifting towards the saplings on the left side of the lane, so I leaned right.   Nothing happened - I continued my trajectory towards the saplings on the left.  Starting to panic and forgetting steering was different, I leaned further right.  Still no change in direction, and as a result I plowed into those saplings.  Because I was already leaning right, the ATC flipped, landed on me and rolled off.

It took Kyla a minute or two to realize I wasn't behind her anymore.  I'm sure her heart must've come close to stopping as she drove back to where I was.  There were a couple of fender parts on the ground and the ATC was upside down.  I was a little bruised and muddy, but otherwise fine - God's protection!  She helped me roll the bike back on its wheels and we headed back to her house at a slower pace, and we didn't ride bikes anymore that week.

For a number of years while we were in high school, Mom and Dad had a 2-door Dodge Aspen with a 318.  That car could motor!  Generally Mom drove it, and one Christmas holiday she was driving us to the community ski hill for the day.  My brother and I often got season's passes to the hill during high school and spent most days and evenings during the holidays there.

This particular day there was a bunch of snow on the roads from the snowstorm the night before.  The drive to the ski hill had a significant downhill section with a sharp curve at the bottom.  My mom refrained from pressing the brakes to hard going down the hill to avoid skidding, but unfortunately that meant we had too much momentum to safely make the turn at the bottom.  We fishtailed into the opposite lane going around that turn.  Fortunately, there were no oncoming cars.  Still trying to control the car, Mom fishtailed back into our lane and then did a 180 across the road into a telephone pole.  Again, no oncoming cars had impeded our slide into the telephone pole. God was protecting us with good timing!

My Dad had a small Toyota pickup that he used as a commuting vehicle for work when we were growing up.  We also used it to haul the wood to heat our house for the winter and go on fishing trips up in the mountains.  It didn't like road salt that much, so by the time my Dad was ready to give the truck to me it was 'well used' and in rough shape.  Originally the truck was yellow, but by the time I got it, we called it 'the overripe banana' because the rust on it made it look.... well, like an overripe banana.  Additionally, the engine wasn't running on all its cylinders - so much so that when I drove the truck to work I had to take a run at larger hills to ensure I didn't slow down too much before getting to the top.

One of the 'fun' things to do in our small, remote community was to take old vehicles out on the logging roads and do fishtails and doughnuts.  We'd 'take our beater out for a dig' - basically all the fun stuff that was not really legal on a paved road.

The summer after I graduated, right before the August long weekend Dad signed the truck over to me and then promptly left with Mom for a weekend getaway.  I lost no time in picking up Shane M., a friend from school and church, to take the 'yellow banana' out for a dig.  I didn't have a lot of experience doing intentional fishtails and donuts in a vehicle, but did my best trying to impress Shane.  At one point, I found a gravel pit that looked fun to burn around in.  We drove in there at a fair speed and I pulled the emergency brake an yanked the wheel sideways.  As we started to slide sideways, I began to question my judgement as rocks the size of softballs were kicked up over the passenger door by the leading edge of the truck.  Immediately after that the front tire right tire caught an edge, dug in deep, and the truck rolled over onto its roof.

Fortunately we had our seatbelts on.  I don't think there is a graceful was to unbuckle your seatbelt when your hanging upside down by it.  We got out of the truck, a little scratched from the broken glass, but otherwise fine.  Again, God's protection! I walked to a nearby house and called for help.  The policeman that showed up was my brother's girlfriend's father.  He thought the whole thing was rather funny but warned me it could have been much worse.  Then he called the tow-truck and drove us home.