I usually take a bit of a break from volunteering over the summer because I'm pretty busy over the course of the school year.  However this summer, our church was needing some help with music (people going on vacation, etc.) and I felt God telling me to help since we had no major vacation plans.  Bible verses like 'Don't be weary in well doing...' Gal. 6:9, 'Cast your bread upon the waters...' Eccl 11:1, and the idea of 'scattering seed' Matt. 23 kept bouncing around in my head.   I agreed to help, and ended up being busy almost all summer - either playing or leading.  I don't take these commitments lightly - there's practice and preparation involved before each week.  For the most part, I enjoy doing it.  After everything is over on Sunday afternoon, I'm wiped.  I think I'm getting older. 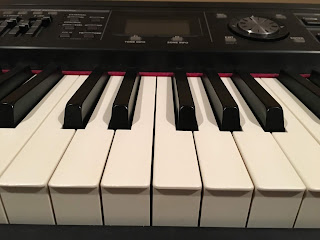 The band's schedule was ironed out as the summer progressed, so I didn't actually know what my full engagement level and responsibilities would be over the course of the summer until the second week of August.  As summer began, I had been asked to lead the band earlier in July, which I agreed to.  I ended up getting a nasty cold at the beginning of July that hung on all through the month and wore me down a bit.  I could sing, but I tired easily.  After leading on July 15th, I wrote in my journal '...and while the band did well, I didn't think or feel like worship was anything special.  No one said anything about it.  So I let it go and was fine with never leading worship again at church.'

Ironically, a couple days after writing that journal entry, I was rather surprised when I got asked to help lead again - two more Sundays in August.  I agreed again.  With both of these I wasn't entirely sure what kind of band I'd be playing with as schedules were getting juggled, which added a bit to the burden.  In situations where things happen that are outside of my control, I've come to a point where I just commit everything to God and leave it in His hands.  I do my part and let Him take care of the rest.  If the mid-week rehearsal is cancelled because the sound guy is on holidays, I try to come more prepared on Sunday.  Even then, I later wrote in my journal after one of the services:  "I don't know if I've ever felt more inadequate before leading a worship service."  That's a good place to be though, given what Paul said in 2 Cor. 12:10.  "That is why, for Christ’s sake, I delight in weaknesses, ... in difficulties. For when I am weak, then I am strong."

Its been amazing to me how God comes through when I let go and learn to trust Him.  I'm realizing that my perspective of 'how things went' is not something I should focus on.  God has His own way of using lyrics and words to impact His people... He places ideas and thoughts into people's minds based on their experiences - things I'd have no idea about - that end up having a greater influence and influence than I could ask or even hope to accomplish.

Its funny.  This post was supposed to be about 'Doing or Being' but I got totally side-tracked writing about something else.  Guess I had to get it off my chest.