God's character doesn't change.   He is the same yesterday, today, and forever.  Something I realize though, is that our actions dictate - to some degree - how God acts toward us.  Examples?


In all of these situations, there was an agreement involved.  People needed to act thusly and a certainly response was warranted.  If they didn't, God said he would respond a different way.  Its not the God 'changes His mind.'

In the past couple of days I felt like God was speaking to me about the last two examples above.  I didn't (and I'm not sure I still) understand the context behind why God is highlighting these examples for me right now.  Originally I was thinking 'maybe, now that I'm more on a right track with my relationship with Him, things will change for me for the better.'  I'm not yet convinced of that, and consequently I remain hesitant and uncertain about why God is pointing these verses out to me.

Why am I not yet convinced?  Why am I uncertain?  Simply - stuff happens that makes me wonder or doubt that 'the good option' might be the case.  Case in point?  I read about David and Solomon and the covenant that God put in place for them this morning, and I wondered why this idea of 'God seemingly changing His mind' was coming up again.  While I was pondering this and getting ready, the thought came 'perhaps its meant in a good way?  Things will change for the better?'  I thought 'Cool!  I'll take that!' 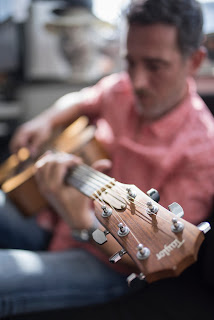 I was on for playing acoustic guitar and church today and I played and worshipped my heart out.  I felt like my monitor was low, and asked for it to be turned up.  In the end, I was told that I had been accidentally muted.  Groan.  I wasn't originally scheduled to play this week.  I had been asked to rescheduled so that we could have a full band for the first day our new worship pastor was in church.  But then, why play if I'm muted?  lol   I get it - mistakes happen.  But man, sometimes it can be frustrating, and it DOES make me wonder what God is up to...
at May 11, 2018