Let God have all your worries and cares,
for he is always thinking about you and watching everything that concerns you.
1 Peter 5:7

Our son Erik was an answer to prayer the day he was born.  He also had a couple health issues as an infant and a toddler that had us concerned for a while, but God was in control.  Here's my journal entries about these experiences:

May 11, 2002
We prayed that Ewa’s labour would be on a day that I was off work, so that we could easily get Kornelia over to our friend, Mandy, who would look after her.  We also asked God to arrange it so that it would be during the morning, quick, and natural (as Ewa had a c-section with Kornelia). God totally answered these prayers.  Ewa’s water broke at 10 am on Saturday April 27, and by 11am we were on the way to the hospital and Kornelia was at Mandy’s.  Erik was born at 2:20 that afternoon.  A natural childbirth with 3 and a half hours of labour, and relatively easy.  Ewa felt really good about it.  We took Erik home on Sunday.  God answers prayer!
Later that week he started having ‘episodes’ which turned out to be from low blood-sugar.  We took him to emergency at the children’s hospital on Thursday morning.  They just about let us go saying they couldn't find anything wrong and then Erik had another episode right in front of the doc.  They immediately rushed him into a special room and discovered his blood sugar was less than 1!  They admitted him and he stayed on an IV until Sunday morning. They released us on Monday evening.  Erik was much better and hasn’t had an ‘episode’ since.  Pretty scary though.

April 2005
Erik gave us another health scare at the beginning of April.  He had a low blood sugar level and spent some time in the hospital.  He was actually born with low blood sugar, but he hasn't had any problems 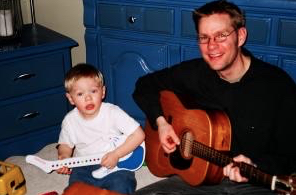 with it up to this point.  He spent the better part of a week in and out of the hospital at the beginning of this month.  Fortunately, Calgary has a great children's hospital, and a great staff.  Erik has fully recovered now, and we'll find out tomorrow what the specialists think is up with his blood sugar.  A number of tests were done while he was in the hospital.  We know he doesn't have diabetes, and the doctors were pretty sure there isn't a hormone imbalance.  God is in control.

The doctors never did nail down exactly what the problem with Erik was.  They believed it was related to his body having troubles metabolizing ketones - basically we couldn't let him go without food too long, otherwise his blood sugar would drop dangerously low.  So we ensured he had snacks as soon as he got up, before he went to bed, and that he never got too hungry during the day.

The doctors felt he'd probably grow out of it, which is seems he did.  He's now a strapping 6'2'' lad, outweighing me by 20 pounds or so.  God is faithful and He hears our prayers.