My Growth as a Keyboardist

One of the questions asked in the Keyboard Workshop at the Fire and Fragrance conference last weekend was from a fellow wondering if I could go through my 'evolution/growth' as a keyboard player.  I was thinking about that again yesterday and thought it would make an interesting blog post.  (ha, I guess y'all can tell me if you think its interesting or not) 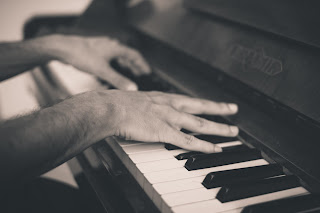 I took lessons growing up, following the Royal Conservatory of Music curriculum for the most part.  As a result, I learned to read notes.  Teachers had a major impact on my progress and development - most negative, and one in particular mostly positive.  To read more about that experience, check this post out in my other blog.

Betty-Anne, the teacher who had the best influence on me, encouraged me to learn songs by ear, rather than using notes.  I began playing in church at around 13, and played most songs by ear there - first picking out the melody a note at a time with my right hand, and then adding simple chords with my left hand as I gained more confidence.  Back then (mid-80's) we were in a small church.  My Dad led worship, my Mom played the organ, and I played the piano.  There wasn't much thought given to arrangements or parts.

Around the end of high school I was still playing in church and getting better.  I was learning other songs by ear (lots of Keith Green) and I was trying to implement some of his style and riffs into my church playing.  This meant I played 3 note chords in my right hand (trying to ensure that the highest note followed the melody of the song) and octave bass notes in my left hand with it providing more of the rhythm.

Right after high school I did one year as a music major at Summit Pacific College (called Western Pentecostal Bible College back then).  I continued to get more comfortable with adding licks and riffs to my playing with following the 3 note RH and octave LH paradigm.  I also started to learn song and key transitions as well as playing free worship music - something I enjoy and feels natural to me.

After one year of college I went to Texas to Last Days Ministries (the one founded by Keith Green and his wife Melody) and lived there for almost 4 years.  I worked in the Print Shop there, and played keys with the Last Days Ministries Band.  Playing with the band was my start in learning to play less - keeping things more simple.  While I was there I also played in a small local church as the only instrumentalist they had (piano).  This was exclusively hymns.

I spent the next 15 years playing in churches off and on, balancing family responsibilities.  Sometimes I'd play piano in church, sometimes drums, but thinking that I was accomplished enough to not worry about practicing much (lazy attitude, with some pride thrown in).  I got to a point where I felt like I was stuck in a rut - God wasn't moving me forward in my music ministry the way I felt like He should based on the 'giftings' that I felt I had.  I was getting frustrated.  God let me stew for a while.

Several things happened fairly close together (within a year or two) at this point in my life.

I discovered the Alberta Children's Hospital had a beautiful grand piano in their cafeteria that they
were inviting people to play.  I totally felt God nudging me to get involved there.  I got my security clearance and started working up a repetoire.  That has been a really good exercise for me, because it forces me to play songs alone...   Through that continued experience (I still play there), I've learned to listen as I play.  Hear what others are hearing, and in doing I've realized its not how busy and complex I can play, but am I feeling the piece?  Is it grabbing my emotions?  If I can feel the piece as I play it, and its getting a hold of my emotions, other people tune into that.  Its been quite interesting to see and hear the different responses as I play there.  My wife has encouraged me to write some blog posts about some of those experiences, so hopefully I'll get to those soon.

Another door that opened was I was asked to lead a student worship band at one of the local Christian schools.  I've been doing that for 5 years now, and that experience forces me to constantly think about how to simplify and communicate keyboard playing in the context of a band.

Currently when I play keys, I do several things: